Château Ducru-Beaucaillou reveals a commemorative label designed exclusively for the 2020 vintage, its tercentenary vintage.
In celebration of its tercentenary, Château Ducru-Beaucaillou has reinvented its historic label. At once elegant and sophisticated, decisively modern and audaciously disruptive, the new design nonetheless maintains continuity with the estate’s history and centuries-old values, striking a magnificent balance between the classic and the contemporary in an expression of joy and liberty.

Capturing the brilliance, perspectives, and energy of the 2020 vintage, the design is the result of a holistic approach to the aesthetics of the bottle and the wine within. A true aficionado of contemporary art, Bruno-Eugène Borie explains his affinities:

“It was our conviction that the creation of this ephemeral label designed expressly for Château Ducru-Beaucaillou’s three hundredth vintage had to be seen as an event in and of itself. It was necessarily inspired by a kind of poetic rebirth of Ducru-Beaucaillou’s legendary label, which had remained unchanged since its creation by the Johnstons in 1870. This new design recalls major art movements and techniques of the twentieth century: abstract art, collage, destruc- tured forms, and new realism.”

The playful yet deliberate design is reminiscent of lacerated works of art, and the triple collage of the Victorian tower from the château’s southern façade incarnates the estate’s three centuries of existence and the three generations of the Borie family to helm Château Ducru-Beaucaillou. Like a series of triptychs or ripple effects, they lend resonance to the dazzling illuminations of those inspired beings who have from one era to the next sublimated this most exceptional wine as they sought out myriad expressions of the spirit and celebrations of the ineffable.

Pure and modern, the tricentenary logotype appears in enameled orange characters on the bottle’s shoulder, just above the label. The upper part of the neck is sealed with wax embossed with the estate’s seal in its signature orange hue, a color that evokes Orient, Asia and the Palladian art forms that the Johnstons held dear. It is a design in which the present and the past come together in the pursuit of excellence, a feast for the eyes that is a fitting prelude to the delights of the precious nectar within.
Download the 2020 presentation kit 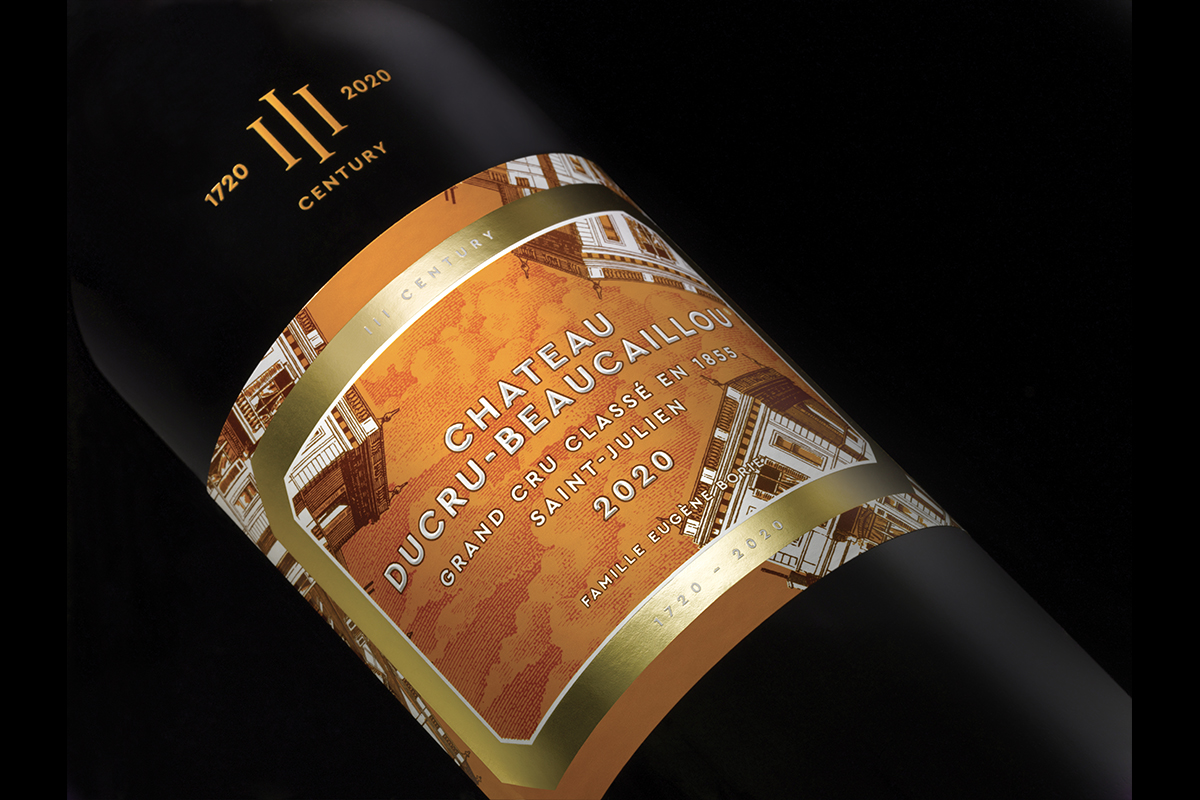